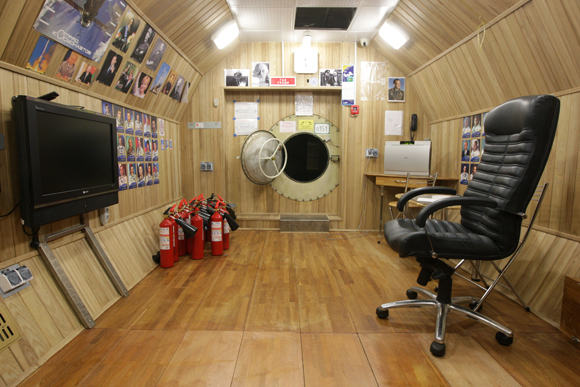 ↑ Photo from the related "Mars500" Mission

2012/2013:
This outline was written as an application to a grant in 2012/2013.
The grant was rejected. However, an annoyingly similar project was carried out by another group.

Inspired by experiments like Makrolab, Mars500, Biosphere-2, and the work of Dragan Živadinov's fifty-year theatrical process "Noordung" & "Postgravity Art" -- H-S-S is a Contained Environment Hacker Habitat mission hosted in CHT#1, a hackbase (live-in hacklab) in Lanzarote (Canary Islands, Spain). Radically challenging “The Roommate Anti-Pattern” of the classical hackerspace design, the H-S-S crew lives and works together as a part of an actual space-faring mission, in a tightly isolated, sensor-monitored, self-improving intelligent (cyber) environment, for 3 months.

What happens if we, somewhat, send a hacker-space and its inhabitants to deep space? How can we make it run as ideally as possible?

In the system of exposed topics, our mission addresses habitats / human environments, but it also touches ground on maker education and economics aspects.

Understanding Contained Environment Habitats coliving & coworking practices
New forms of coliving practices (Co-ops, Intentional communities, ...) are a highly relevant response to social, political, economic and cultural changes, partly caused by the spread of networked, digital information and communications technologies, known as Network Society / Networked individualism: "We call networked individualism an “operating system” because it describes the ways in which people connect, communicate, and exchange nformation" (Rainie L., Wellman B.)
It is becoming clear that the two traditional societal axioms - the nuclear family as the basic fabric of life in society, and the hierarchical company for the working part - are transforming, and themselves losing ground. New institutional systems need to be researched and introduced to correspond to diverse new needs, in our case both for “hackers” - individuals with a specific ethics, focused on innovation and creativity, and space-farers.

Crossing the human dynamics of space missions with the work ethics of hackerspaces serve H-S-S as its experimental foundation.
Comparing these in order to understand a new “operating system” of people’s behaviours and attitudes would enlighten insights in new social dynamics in general.

Constrained resources; new transparent & open management/operations practices
For any “do-oriented” coliving communities of our time, resource constraints are reality. Full-time experimental life in these environments, with our proposed methodologies and practices, will illuminate important aspects of socially responsible & totally inclusive innovation, that will be adaptable to other resource constrained models.

Astronautical hygiene (The box, and Strategies of well being)
What is specifically impossible, or in turn uniquely possible only inside a Space Monad, a box in space? Which already existing space mission practices can be adopted by coliving communities, such as hackerspaces - somewhat less contained, but still built for resilience? Which new patterns and anti-patterns could be identified?

Inner- and inter-planetary civilisation resilience strategies
With any planet-scale Earth catastrophe we might be forced to live in “boxes” (caves, shelters, spaceships, other world settlements,...), possibly for an era. How would the canonical roommate anti-patterns serve us in this environment? How to ensure a solid foundation for an express crisis-hacking setup, that would help humanity immediately find optimal hackflows to prevent & resist any sorts of disasters.

Educating and promoting == scaling the hacker culture
CHT#1’s location is unique. Lanzarote is a Spanish island of 40x20km, ~100km from the Saharan coast, it has ~150.000 inhabitants, is the only fully Unesco-protected island in the world, and its airport carries over 6 million passengers yearly. Apparently, the Apollo moon mission crews have been shown the pictures of Timanfaya national park to give them an idea about what where they’d be going was like. CHT#1 is an ambitious project: both the south- and westernmost EU hackerspace. We would like to use H-S-S as a vehicle to extend our work here in this peculiar habitat. Secondly, we both wish to, and need to, involve non-hacker outside advisors & partners - persons and institutions - thus exposing them to hacker ethics. We will attempt to trigger systemic changes, and study a general model on how to do that, too.

An on-deck computer
Everybody knows future human expeditions need an awesome house computer. Josh Hariss’s experiment, documented in We Live in Public (2009), was a dystopic vision of a future of totally monitored, anxious habitats, while in All Watched Over by Machines of Loving Grace (2011), computers have been shown as failing humanity’s hope of a dramatic improvement of our condition. Our project is creating a strong foothold for steps in the other direction, theoretically and practically researching an “optimal” human environment, where people are assisted by
machines. Creating a quantified environment, and systematically experimenting with parameter configurations, H-S-S offers a new effective management of human habitats based on continuously collected data.

Hackers in space
Who are the new cowboys? Who else has the stamina and skills to do it? We boldly propose this mission, and hope to research this new territories.

CHT#1 is a live-in hackerspace, systematically measuring, reflecting & fueling the creativity and innovation process through collected data, analytical models, and use of flows & tools we are collecting and developing and are keen to release.

The H-S-S mission is its conceptual upgrade: a radicalisation of the experimental environment, in a space voyage-like isolation, for a crew of 6.

The main general goal of hackerspaces is the maximization of technological creativity in such an environment through sharing, re-imagining a community, and collaboration. The project would loosely replicate Mars500 and others, but reanimate them with a different context, ambitions, the focus on repeatability, hacker ethics, DIY, open-everything, cost efficiency, etc. Research, development and use of open source
hardware, software and finally sociodynamic technologies would be the main project
focus.

The individual projects below both base on, and establish, the platform.


● Internet3.
There is no AJAX, Youtube, or Amazon Whispernet in space. A replacement will be researched, developed & used: an intelligently synced and growing collection, with an inherent intention to bring in relevant data before it is needed. Study & simulation of existing work on long-distance (lagged) protocols.


● Allende, the house computer.
A decision support system, based on sensor data, with the intention to research and restart the Cybersyn project for micro and macro communities.


● Psychology / sociodynamics.
○ studies into role of, and attempt to go beyond personal space
○ cultural differences of crew, and influences on interpersonal issues
○ nonverbal communication
○ freedom of choice in closed environments, and totalism
○ letting go of “the roommate anti-pattern”
○ strategies against "You can not meet a new person in space" issue


● Sound, Light, Smells.
Sensory influences on personal/interpersonal feel/behavior will be investigated. Generative music & sonic templates will be produced, some to actually reproduce the 85db ruckus of machinery, others to provide contrast to that. (For future space programs it is essential that the noise levels are reduced). Generative light systems & visualia will also be produced. “Virtual reality” will be future reality, and we wish to induce a transcendental feeling to breed suspension of disbelief.


● Theoretical investigations.
Plenty of time to experience the time-space vacuum will enable moments of suspension of disbelief. Why go to space? What to do during the missions? Explaining motivation to ever considering inhabiting such environments (...as this one, and beyond)?


● “Your project here”.
Unstructured time and emergent challenges will produce and inspire other relevant work. Everything the residents produce shall be released under free licences.

People will be going to space in groups - communities, and (if they’re not going to be sedated while doing so) they will experience the uncommon group dynamics we are setting to investigate. There are also existing closed/semi-closed environments where findings of our experiment can be transferred as “good practices” in order to provide better conditions (prisons, hospitals,...).
This is both for our future outer space missions, and the ones we are sustaining here on Earth in our family homes, self-sustaining communes, and student dorms... The box's surrounding might be anything; we will be looking at the insides.

● Inclusive:
The Mars500 experiment’s male-only crew is not representative. (They took this decision since in 2000. a Russian crew member tried to forcefully french-kiss a female Canadian crew member, twice. The “space ship” had to be separated into two parts, and locks installed). We’d like to think this could be improved.

● ...but for & as hackers / citizen scientists / new-art:
Astronauts are exceptional people with specific skill sets, backgrounds, and body-mind characteristics. We want a template for the hip techies, insecure system admins, experimental rockers, even comic book lovers.

● More unstructured time:
Astronauts are usually very busy with cutting-edge science. We will step into the role of post-pioneers, trying to position ourselves into a situation with more systemic boredom, room for philosophical enquiry, and going crazy (and managing that).

● The Exploration / Habitation distinction:
Important for this project, and our understanding of space missions in general, is a distinction between exploration (like Mars500 visiting & returning from Mars) and habitation: this H-S-S mission imagines going one way, and then plans a “settlement” there.

Do meaningful and useful work on all projects. Bring awesome results in agreed timeframes.

Some phases might overlap, with desire to minimally compromise the mission conceptual integrity.

The CHT#1/H-S-S project continues after this mission ends.

CHT#1 is the first in a planned series of EU live-in hacklab residences.

We have been working in the H-S-S direction for years. We trace personal continued CHT habitation research back to at least 2007, when a group of startup engineers in London rented a house together, and built a complex information retrieval product in 3 months, with seed money.

CHT#1 -> CHT#1/H-S-S is an opportunity for a bold evolutionary next step.


Trivia:
● CHT#1 is based in Lanzarote (Canary Islands, Spain), and running since December 2011. Dozens of people have stayed & worked here in this time.
● Size of the space is approximately 80 m^2, in four storeys.
● We have already fitted the house with an externality blocking system, allowing us to define basic problems and perform initial experiments. There has been banning of earthly clocks, practicing own systems for prolonged times, with very interesting effects.
● Our underground water tank is not unlike the Altered States (1980)-one
● Everyone agrees that sleeping with brain interfaces, being woken up to simulate unexpected space-faring complications while being on streaming video, is awesome

A Public Callout will be issued for the Crew once the mission is go.

The form of the call is itself a matter of best practice development. We see callouts as a basic component of future hacker residences... Similar to what NBA does with drafts.

● “the representative approach” / shakeup
○ (we should not make the same mistake as Mars500)
○ male/female, different psychological profiles, ...
○ “Who will really pioneer space habitation?”

● Lessons from current space (and other contained environment) missions (“How do they pick the crew for X?”)


We warrant all roles fulfilment. Pre-scheduling is complex, because it is a rather big comitment to participate.

[grant organiser]
We hope for media support, think-tanking in all stages, and future co-operation on the running the remodeled CHT#1/H-S-S to best purposes.

middlemachine Ltd.
is a Slovenian company, founded in 2009 to investigate intelligent technologies on the intersection of Mobile, Contextual computing, and the Linked Data Web. Its primary focus is to develop a next generation thought organisational tool for ideation, publication and execution. The prototype of this captured imagination and support of Technology park Ljubljana, Slovenian technology development fund, Nokia, and Seedcamp, among others Current mission is to remodel its business proposition, open sourcing the code, and focusing on self-hosted instances. The transition is planned to conclude in Q3 2013.

● subsistence : covered by crew (via fees)


Items delivereed with finish of project:

● A collection of analytical/statistical findings

● CHT#1/H-S-S: the spaceship-enabled public live-in hacklab
○ After the end of the mission, the H-S-S continues to exist and will be reused for further mission
○ We will arrange a formal model of responsibility to preserve, improve, and upgrade the H-S-S, and investigate new forms of proprietorship. We would propose [grant organiser] to be involved.


(Site generated by E2H, an "Etherpad hypermedia" project by @dcht00).